ERIAFF (The European Region for Innovation in Agriculture, Food and Forestry) is a network developed in 2012 as an informal partnership through the initiative of a core group of 17 European Regions, led by the Regional Government of Tuscany, with the aim to facilitate integration of the European policies promoting innovation in agriculture, food systems and forestry areas. ERIAFF has encouraged its partners to work on themes of common interest and reached the total of 43 Regions from 13 European Union Member States. ERIAFF members developed interregional Operational Groups, which are linked by common priorities and goals or made a considerable contribution to the Smart Specialization Strategy Agrifood Platform launched by the European Commission. ERIAFF members work together on identifying the needs and the priorities of innovation, as well as sharing the best practices and respective programmes and projects, in order to ease synergies between actors of the territory and improve the participation in projects and European initiatives. ERIAFF Regions strongly support The European Green Deal and its Farm to Fork Strategy, and specifically the action on “Knowledge sharing, research, innovation and financial investments to provide solutions for sustainable food systems and market opportunities”. 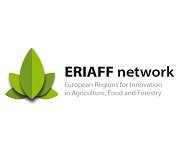