The past decade has seen the regulation of food safety within the European Union face unprecedented challenges, such as BSE, the contamination of food with dioxins, and the increasing occurrence of infectious agents like Salmonella, as well as the emergence of new products and technologies (genetically modified food) and a heightened sensitivity of the public towards biotechnology and animal welfare. As a consequence, most European countries and the EU institutions have witnessed major reforms to their regulatory systems on food safety, often characterised by a stricter separation of the scientific and political components of risk analysis, a reference to the precautionary principle and a stronger commitment to the principles of transparency, participation and accountability.

Against this background, this book investigates the legal and institutional structures of food safety regulation and their recent developments in France, the United Kingdom, Germany, Sweden, Hungary, and at the EU level. The choice of countries is intended to shed light on the different ways in which European systems of food safety regulation have been affected by major food scares: where France, the UK, Germany, and the EU were the main actors in the 1996 BSE crisis, Sweden was left untouched, and Hungary entered the EU only after the outbreak of the crisis. In addition, the book provides insights into how the various actors perceive the practical functioning of these systems. Special attention is given to how the different regulatory frameworks address challenges related to scientific uncertainty and socio-political ambiguity, the interaction of different levels of governance, and the principles of good governance. On the basis of these findings, the book aims to identify commonalities and differences between the various systems. In this way, it seeks to understand the main challenges that the current systems of food safety regulation in Europe, in particular the EU system, face so as to offer a solid basis for rethinking these structures. 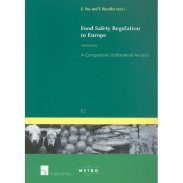